Since we had done everything we planned, we lingered over breakfast and then spent a while sitting in the room after packing everything up. After checking out, we went out to revisit anything we might have missed. We really hadn’t missed anything. Not that Prague is short on sites, it’s just that they’re all very close together. So it was back to Wenceslaus Square and back to Old Town Square and back to the Charles Bridge. My companion wanted to get a kolbasi sandwich until she realized that it was walking food so we went to a restaurant and had a plate. I have determined that Czechs do not like vegetables. The first meal I had here was pork loin and dumplings. No vegetables. The second meal was goulash with dumplings. No vegetables. The third meal was pork ribs. Those came with a vegetable if you count the raw onions or the horseradish. I ate the horseradish as it was excellent, but not the onions. The fourth meal was pork rids at a different restaurant. This came with a couple pieces of lettuce, which my companion thought was for garnish, but I ate them anyway. This last meal was an eight-inch chunk of kolbasi with mustard and horseradish, which was, if anything, better than the last horseradish.

Once it started getting dark we set off for the hotel to wind out the last few hours before pick up for our flight and naturally got lost. I figured no matter which way we turned in that part of town we were going to get near where we needed to be and lo we turned a corner and were at the foot of We    nceslaus Square.

And travel days still suck, but this one not as much. We ended up lingering in the hotel bar for 6 hours before our driver arrived, but it was a straight flight back to Abu Dhabi so no long layover and I had the window seat so I managed to sleep a lot. The new E-gate system was super fast. We got to skip the enormous Immigration line and breeze right through. The luggage arrived about the same time we did. The drive home was uneventful. Then I just had to stay awake until I could go to bed and completely miss what festivities there were. Did I mention we arrived home on New Year’s Eve? Fire works? What fire works? Didn’t hear a thing.

And now a few things I had to share.

On the first day of our trip one of the other memebers of our tour group asked about this pastry she had seen on the street, but didn’t know the name of. She said someone told her and it sounded like “turtleneck.” Jana, our guide started laughing. Trdelnik! In Czech slang a trdelnik is someone who has a good heart, but is kinda stupid. I looked at my travel companion and said, “New code word!” So should you ever hear me say someone is a turtleneck, you will understand. Trdelniks are beyond tasty. Just pastry dough wrapped around these huge wooden rods, rolled in sugar and almonds and hung over coals to roll, really fast, until they are browned on all sides. I didn’t have one until the last day and I’m very glad I didn’t or I would have been snarfing then down everyday and all the walking in the world would not have saved my hips. 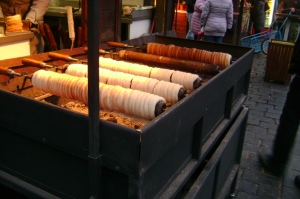 These last two shots amuse me. Jana, our first guide, was pretty young. She was still in elementary school at best when communism fell. To her it was history like bell bottoms, pill box hats and flappers. Our WWII guide was about my age and in high school or college when communism fell. He remembered textbooks that had been rewritten and had lots of fun tidbits about where the KGB used to operate and the biggest statue of Stalin in the world that was not quite finished when Brezhnev started saying that maybe, possibly Stalin was a teensy bit wrong and all those deaths were a bad idea. He sort of viewed commission like you might view a slightly crazy uncle who smelled funny and was a little scary, but doesn’t visit anymore.  The tour guide who took us to Terezin, she was an adult when communism fell and she hated it with a personal fire. As we waited for the bus, she pointed out the National Museum at the top of Wenceslaus Square, particularly the light spots. It seems that in 1968 during Prague Spring the Soviets decided to fire on the Prague Parliament. They took aim and shot – the National Museum. The parliament building is no where near Wenceslaus Square and it does actually say in huge letters over the door “Museum Regni Bohemiae.” One can only assume that the person responsible could not read Czech. Either that or he didn’t want to move the tank all the way across town so he could shoot at the right building. The second picture is the monument to Wenceslaus with a picture of Vaclav Havel in front of it. In front of that are candles in memorial to the two students who immolated themselves in protest of the Soviet clamp down. Behind the monument is the National Museum. The actual memorial to the students in set in the sidewalk where they set themselves on fire in the form of two lumps in the bricks connected by a cross. 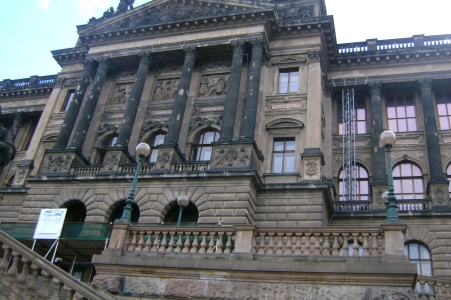 Get free updates of my posts